This was at our campsite. A handsome specimen. 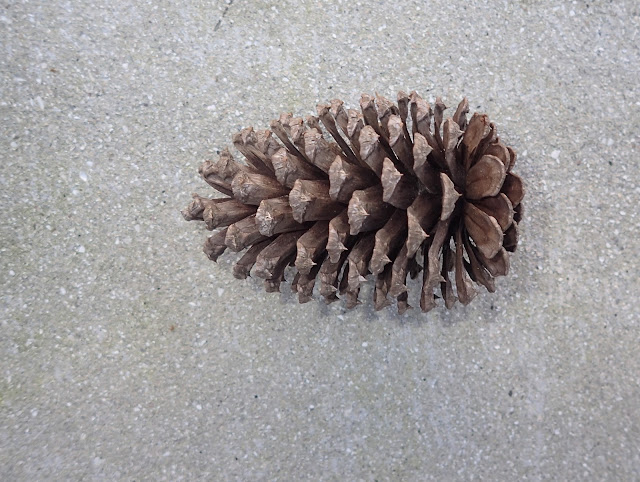 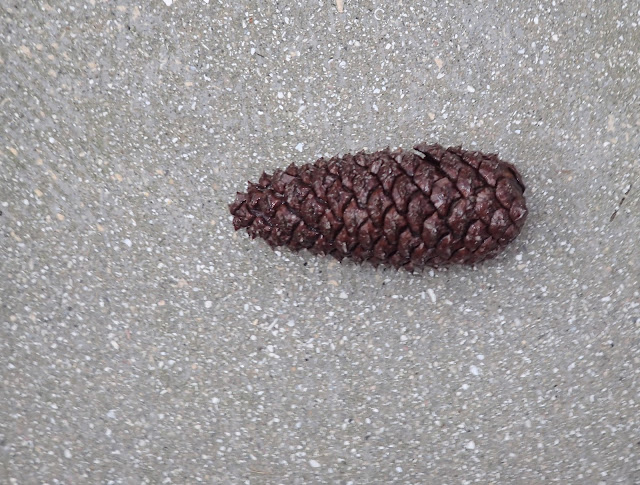 It took a couple days to dry but it is making its comeback. 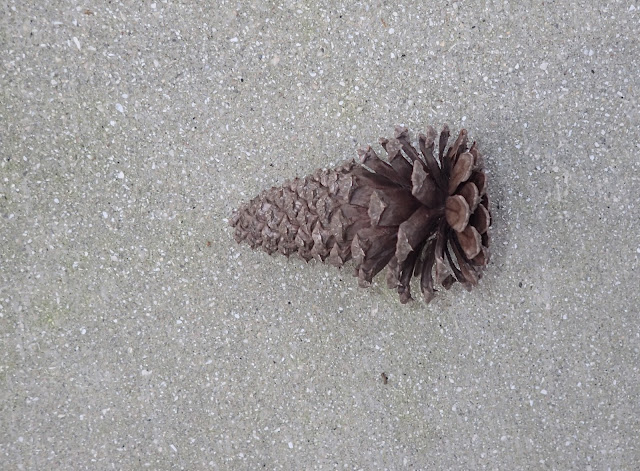 Posted by elmogoss at 6:46 AM No comments:

Now in our 18th month of living full time in this RV, our Vilia, we have a rain day. We have had a few along the way but we have often commented on our good fortune with good weather for such a large part of our travels. We are in Sarasota for near a month. It rains very large raindrops in Florida. Because of the relative rarity of inclement weather over our last year and a half, it is nice to have the rain. It patters warmly on our RV roof. As I write this, the front is intensifying and wind is rippling the awning toppers that extend with our RV slideouts. If you have been in a tent in the wind, that’s the sound. We are in this amazingly large park called Sun-N-Fun. Name did not work today. There are hundreds and hundreds of RV’s.
Our full time RV experience is unique to many of our family and friends. Periodically we hear, “Oh yea, my neighbor’s aunt and uncle went full time for awhile”. But not too much. When you do it, there is no uniqueness, you are part of the crowd. And a good part of the crowd gathers here at Sun-N-Fun. There is a large pool complex with a three story water slide. There is petanque, the French version of bocce. There is “proper” lawn bowls done on a manicured lawn court. They have a woodworking shop, jewelry making, pickleball, and on and on. We are part of the active lifestyle community. Holy Sun City Batman, we are here!


But, it is on hold for today, our welcome rain day and the chance to do things like blog entries.
Posted by elmogoss at 6:55 AM No comments:

Rocky And The Rollers

This cruise we just finished had a fun twist. There was a Rock revival on board. Themed, "Rockin" The Caribbean", The week featured performances by the likes of Freddy Cannon, The Tokens of  "Lion Sleeps Tonight", a song that has sold 13.5 million copies. Lead singer, Jay Siegel, still sings the song in the original key and still carries the purity of the falsetto. Amazing. There was Lenny Welch singing "Since I fell For You", and The Elegants with "Where Are You Little Star". Gary Lewis and the Playboys, Bowser of Sha Na Na and a number of others also. The main performance and back up band, Rocky and the Rollers, with Bowser, put together these cruises four years ago. They have been sell-outs, every time. Rocky and the Rollers is a group made up of Boomer age studio musicians that were involved in many 50's and 60's recording sessions.
If some of the acts faltered in performance from the doings of time, they still delivered enjoyable nostalgia. Those that were still good, were wonderful to hear.
Part of our fun was the Karaoke contest. The winner got to sing with the band the last night of our week cruise.
I've been exposed to performance much of my life, being in various bands and some musical stage. I must admit I have had fun with my ability. So, this Karaoke thing was there and I did it and, well, won the thing. Now, the competition was somewhat weak, so it's not that I am some Bobyonce...
But here is a pic of me on stage with Rocky, the drummer. I'd guess wife Cathy will add more pics to come. 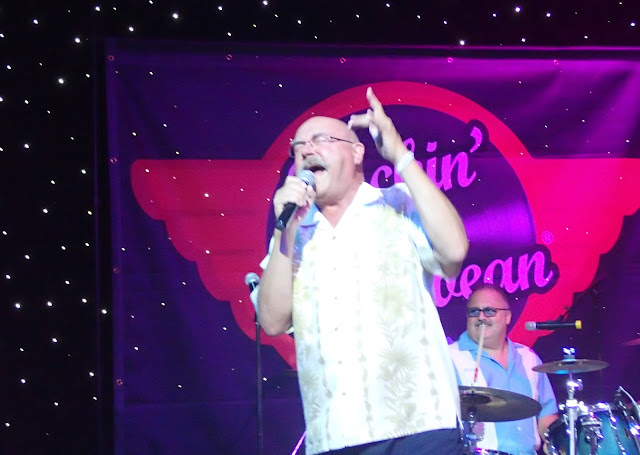 Seen from our cruise ship. 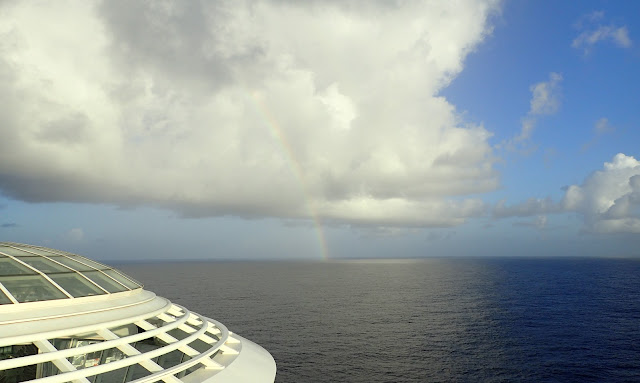 Posted by elmogoss at 4:36 AM No comments:

Living full time in an RV is great for us but we have planned brakes for ourselves along the way to maintain sanity. (the word sanity always reminds me of the Marx Brothers. In one of their movies, they have a skit about signing a contract for something or other. Groucho comments, while reading the contract, that he is not sure about the sanity clause. Chico says, "Wait a minute there's no Sanity Claus!"). OK, that aside we planned, some time back, with some dear old friends to take a Caribbean cruise and that is where we are. It is a 50's-60's rock and roll cruise and we'll have more about that later. This is just to share a few pictures of the massive ship we are on. Supposedly the second largest passenger ship in the world. It is 7 football fields long and carries something like 7,500 people crew included. There are 25 places to eat and 37 bars. It is huge. Here's some photos.
Leaving port in Orlando. 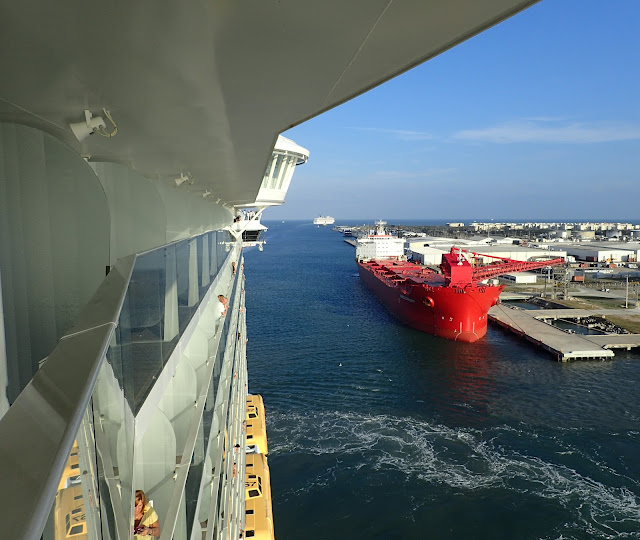 The Ship, Royal Caribbean's Oasis of the Seas, has a "Central Park" which is the largest live plant area on the seas. 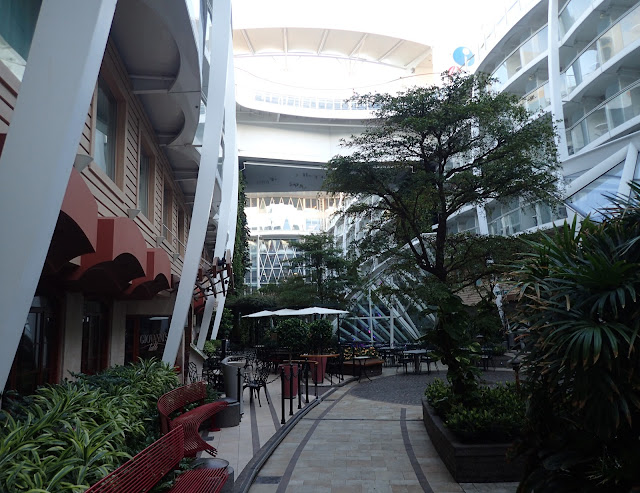 There is a 9 hole golf putting course. 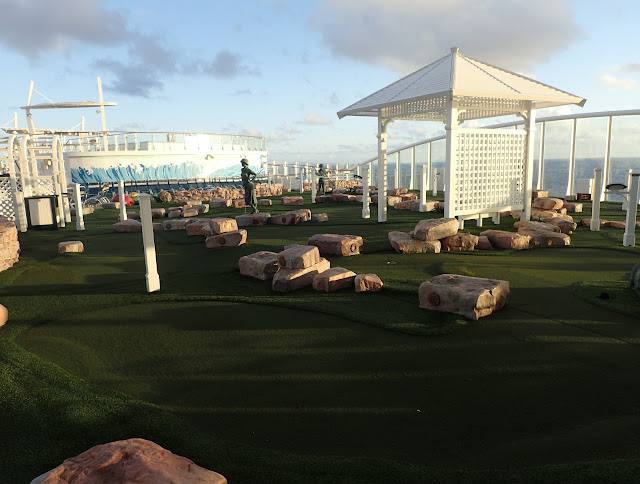 Our view from our cabin at port at first stop, Nassau. 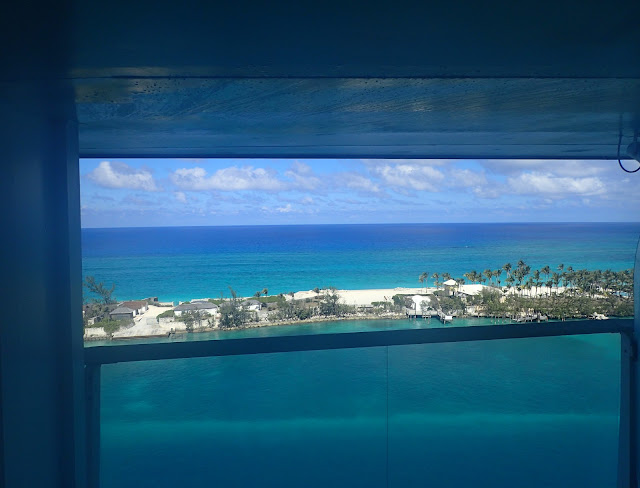