I am not much of a baseball fan. No favorite team, player, etc., although I followed the game quite a bit in my youth.
When I do watch, I am still intrigued by the subtleties of strategy and mental play that go into this often slow paced sport.
But here we are, in the midst of Spring Training so we decide to take in a game. Never had been to a Spring Training game.  The local Sarasota team is the Baltimore Orioles. Orange. Today’s rival for the 1:05 first pitch on a sunny 78 degree day was the Toronto Blue Jays. Blue. Why a team would name themselves after one of Nature’s most annoying birds is beyond me, but there we were.
Pre game was cute with a local Police captain and also a Big Brother volunteer having one of his kids throw the first pitch. Kid got it right over the plate. Then our local Sarasota talent young vocalist was introduced to sing both countries Anthems. She was eye catching in a bright orange dress. Sadly, the microphone would not let her perform. Malfunction. After the second try, and mic failure again, a remarkable thing happening. The sizable half of the crowd wearing blue spontaneously broke into O Canada. Sang the whole difficult anthem, a capella, mostly in tandem throughout the thousands of them at the game,  all the way through, gaining volume as they went along. It was a moment. One of those unrehearsed, unexpected things.
I loved it. Was moved by it. Pride of Nation. Something, it seems, we are trying to relearn right now for ourselves.
We got to sing our anthem to recorded music played over the PA. Must say, the folks from Canada upstaged us.

The game was fun. Lots of player substitutions as managers are trying to fine tune who they want to field on season opening day. There were some fine hits, great infield defensive play. A soaring home run and even a double steal to take runners on first and second to second and third to get out of double play danger. It worked perfectly as the runner to third was thrown out, but they could not get the runner out who advanced to the then vacated second base. So you had a runner in scoring position at second, two outs and, what was then the tying run at bat. It ultimately did not work out. But there it was, baseball strategy.
The Sarasota Ed Smith Stadium. Spring home of the Orioles. 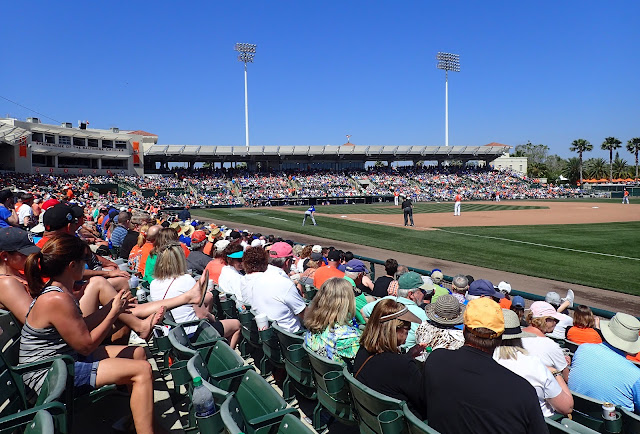 We sat along right field and the stadium outfield is nicely framed by palm trees. 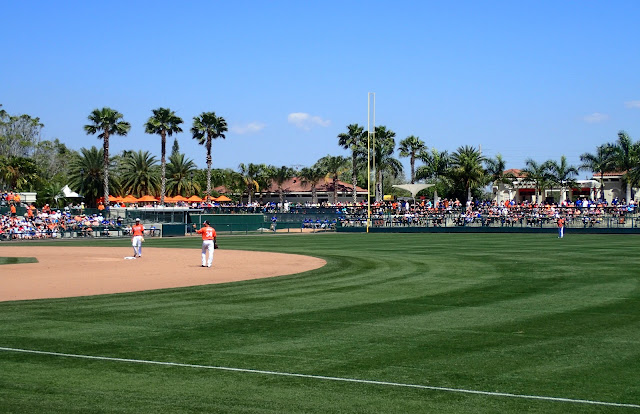 Unlike the big home stadiums, there is only one scoreboard at Ed Smith. Here it is in right center. 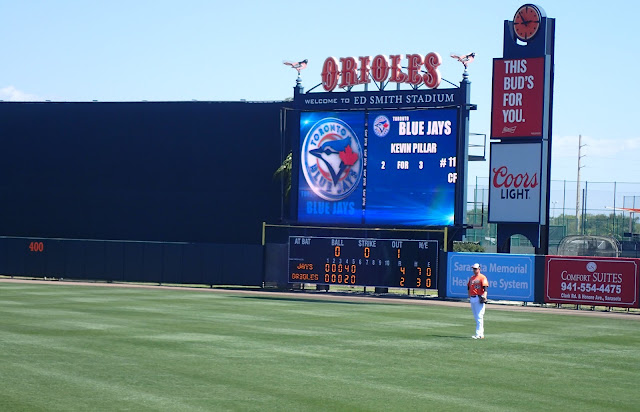