Glenn Frey and a Bottle of Wine

Glenn Frey of the Eagles was a major musical influence for me. Some of his songs have achieved monumental status in and for my life. His passing gave me pause to reflect on that. We interacted twice, although he never knew it. I recorded a CD, First Vintage, of some of my own songs in 1999. One of those songs, “I’m Not Going Back”, was written many years before the CD and opens with a guitar riff that sounds very similar to Frey’s “Lyin’ Eyes”.  I had written that sweeping strum from G to G major 7th, coincidentally, well before the Eagles appeared on the music scene. When I first heard Frey’s song, I remember thinking, hey, that’s mine! That was our first interaction. The second was at Wally’s Wine and Spirits in Los Angeles. Steve Wallace owned Wally’s and had become a purveyor to the stars through his personality, connections and knowledge of the world of wines and liquors. My first visit to his store was in 1986, shortly after I had been transferred to Napa Valley by Wine World, the then Nestle owned parent company of Beringer and other wines. Steve was more gracious than many buyers and let me tell my story of Wine World’s recent acquisition, Souverain Cellars, in Sonoma County. (Souverain was why I had been moved to St. Helena which is a good story for another entry). We went to Steve's back of the store “office area”, which was on top of one of the stacked cases of wine being staged for customer delivery. I noted very nice wines in the various orders and the name, Glenn Frey, written on fourteen of the cases. Glenn had excellent taste and one wine really stood out to me. Bonneau du Martray, a producer of Corton Charlemagne, a chardonnay from the place of the origins of that grape, Burgundy, France. Early on in my wine career I was fortunate to be exposed to many of the world’s finest wines. The 1970’s was the time of the bloom of wine in America, and there were many opportunities to attend wine tastings of very nice wines. Once Sixties era youth, my generation had gotten to the “get real” years of life and many were getting good at making money and a cultural shift was occurring. With that came an increase in our nation’s taste for life’s treats, including nice wine and good food.  The industry was feeling it and it was a time of some amazing cork pulling. I had tasted Bonneau du Martray a few times and it was always a standout for me. I found it to be extraordinary in taste and style and in its aromatics. It remains a classic for my wine life. Even though the last time I tasted it was in 1999, same year as the CD…I was employed at Clos du Val, and it was included in a comparative tasting of chardonnay wines to see how we were doing with our own chardonnay. The Bonneau stood out to me then, as it had before.


Remembering the wine, with the help of Glenn Frey, had me poking around on line for it, just out of curiosity. It is way above my price level. I have always been a wine cheapskate when on my own nickel, relying on accumulated knowledge to purchase and bring a nice glass to dinner.  But then, there it was,  the best price I found for it was at Wally’s on line store. Too much coincidence, so I bought one. It was delivered to our RV site yesterday. End of story? Oh, I guess now with this much of a story told, I will need to share my “tasting notes” when we open this bottle. Will do. 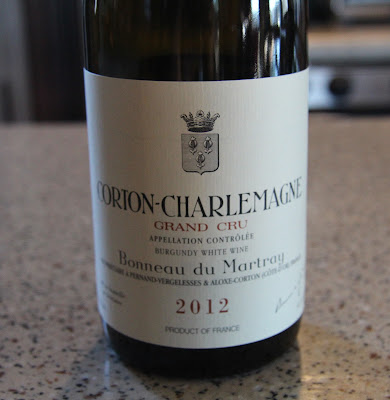