The Saguaro is the largest cactus of the US. With its often uprising “arms” and statuesque appearance, the Saguaro has become emblematic of the US West. Tucson has two Saguaro National Parks. One on the east side of the city and one on the west. We visited the east yesterday in crystalline 60 degree weather. These cacti are very entertaining. Their shapes vary like snowflakes. No two are identical.  Cacti…cannot recall ever using the word before! Many of them mimic human-like forms. The Tohono O’odham tribe of Native Americans that inhabited this area of the Sonoran Desert considered the Saguaro as human. They can be up to 200 years old, they can grow up to 25 “arms”, be 60 feet tall and weigh almost 5000 pounds when hydrated after rainfall. They are the “trees” of this desert “forest” and provide habitat via holes chewed or pecked out in their sides for many birds, chipmunks and other critters. They put out blooms of lovely white flowers in the Spring. I was fortunate to see that at high season on a trip here some years back. By midsummer, those blooms have developed and ripened into a red colored fruit that is enjoyed by many desert inhabitants, including man. It is said to have a taste like strawberry accented figs. The fruit contains thousands of seeds sized smaller than poppy seeds. Over its lifespan, a Saguaro can produce over 40 million seeds! And, maybe, one might actually germinate and produce an offspring.
The ancient Tohono O’odham made wine from the new ripened fruit and would hold a ceremonial drunk fest with the first “vintage” each year. The men would drink until they passed out prone on their backs and the women would paint the soles of their feet red with the thick sediment from the wine. Sounds like a party! While the men were nursing hangovers, the women would cook down juice, separating out the many seeds and use the concentrate for sweetening in cooking over many subsequent months. The seeds were dried and ground into flour for baking needs.


At the Park, there was one overlook info sign that talked of the population decline that happened starting in the 1930’s. At first thought to be the result of man’s intrusion it became realized that a rare freeze period in 1936, ( I think that was the year stated), when temps stayed below freezing even during daytime caused the demise of many of these cacti, (whoa, used the word twice!). It happened again in 1962 but since that time a comeback has been going on. Indeed, we saw many, many little ones on a hike we took amongst them on a beautiful desert trail from a spot called Mica View.
Here are two internet pics. One of the wonderful blossom which is weeks away as yet. Cathy will post a group of some great personal shots she took on our visit. 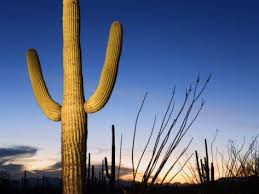 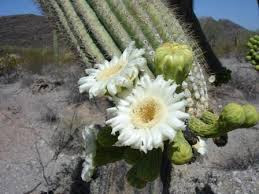